The smallest European cervid occupies a very important area of the ecosystem. Today it is widespread throughout the territory after having been confined for a long time to the Apennine area due to the disappearance of its habitats in the hills and valley floors and due to indiscriminate hunting.

A large and healthy roe deer population represents a point of arrival for the “green" ambitions of a territory that wants to look to sustainability and the highest degree of biodiversity possible. For this reason, the persecution to which they have been subjected in the last 15 years is not justifiable, a ruthless hunt in the province of Pesaro and Urbino which has led to the destruction of almost 1000 specimens every year. Not even the road accidents (almost 100 per year) of which roe deer are the cause and victims can justify such a high number.

Its habitat is limited to stretches of wood alternating with clearings and crossed by small streams. From mountain altitudes to low hills it is able to satisfy its food tastes ranging from certain types of grass to the sprouts of certain plants, from fruit to the new leaves of some trees. In winter, flocks of roe deer can also be sighted, while in the rest of the year the adult males live alone and the female mothers are almost always with the young or the young of the year. The roe deer, if frightened, emits its “bark" with a surprising strength and tone. Male and female roe deer have different habits: during the second year of life males grow antlers and dimensions (height and weight) while the anal mirror becomes more and more evident and with the shape of an inverted bean, while in the female it looks like an inverted heart with a pseudo-tail consisting of a tuft of hair. The males, after spending almost a year with their mother, move away from the area where they were born and start wandering in search of new places. Studies have shown that over 70% of roe deer spend their entire lives within 3km of where they came into the world.

At birth, roe deer are very small, they have streaked and spotted hair on the back to blend in with the vegetation, the mother gives birth to them outdoors, in the tall grass and the cub is absolutely not abandoned, the mother is indeed very loving and caring and that is why she leaves it hidden in the grass and then approaches for those 5 or 6 feedings of milk a day, for at least a month, after which the mother and cub will move together.

The roe deer is an artiodactyl ungulate for which each of its legs is made up of two tapered and sharp hooves, which remain impressed in the ground forming a triangle. With a foot like that, agility and speed in running are guaranteed, and they save a roe deer in good condition from predation by wolves (or dogs) 9 times out of 10.

Males also have two pointed “horns" (antlers) on the head, they are ornaments that are used to demonstrate to the females and other competing males their vigor, to us to understand the age and health of the wearer, or he wore them, if we are lucky enough to find them on the ground.

The roe deer is a species that can be hunted according to the methods of selection hunting, even outside the hunting season, on snow-covered land. 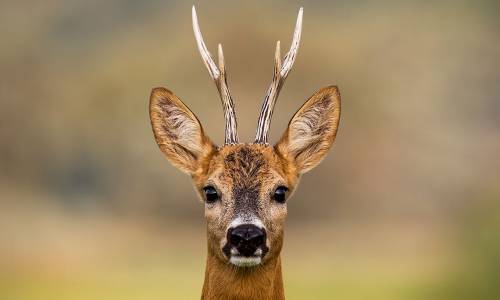 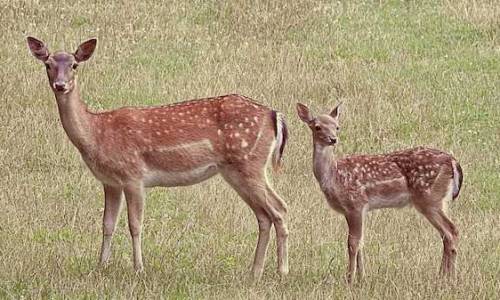