The peregrine falcon, among the falcons, is certainly the most famous for its proverbial speed and acrobatic prowess. It is a small bird of prey that to hunt has refined evolutionary characters that are very close to perfection, so as to guarantee it, in the conditions most

pleasing to it, a good meal every day. This excellent predator, surly defender of his own territory and attentive parent, carefully chooses where to build the nest. The peregrine falcon does not have many needs in terms of space but it has many in terms of the quality of the environment: a forest, rocks, perhaps a river, a lake or even the sea. In the north of the Marches, the peregrine falcon can satisfy its requests, but these places must also be protected from direct and indirect anthropogenic disturbance.

The habitat of choice for the peregrine falcon in this area is the Gola del Furlo although the golden eagles take almost the whole scene, a cutout of the magnificent ecosystem squeezed between limestone and Candigliano is the private property of a pair of peregrine falcons. The peregrine falcon finds the same combination of river and rock walls in the Candigliano Gorge near Piobbico, in the Burano Gorge, in some bends of the Biscubio course. But there are also individuals who live in the crag of Monte San Bartolo and others even in the city: some have arrived there alone and have started a family, as in Fano, in the historic center; others have been introduced experimentally to counteract the presence of pigeons.

In the Gola del Furlo almost every year the scene of the young eagle born in spring is repeated, which at the end of summer makes its first flights, ending up unconsciously in the sector occupied by the peregrine falcon which in turn, patiently, if the repeated, very noisy, vocalizations are not enough, it resorts to demonstration flights that are usually very eloquent which make the unfortunate bird of prey jump and drive away. That the attack of a pilgrim is a death sentence is shown by the behavior of its potential prey: jackdaws, wood pigeons and starlings when they vibrate in flight they do so in large flocks within which there are certainly more probabilities of not being attacked. The peregrine falcon (Falco peregrinus) belongs to the order of the falconiformes and to the family of falconidae. The length of its body is 38-48 cm, the weight of 450-900 grams, the wingspan of 90-110 cm. The female is larger and darker than the male. The wings are pointed and the tail is long and slightly refined at the tip. The adult’s coloring ranges from the slate-colored back to the whitish chest, the black head; in juveniles the background color is brown-streaked. If it finds its habitat, it can live from sea level up to 2,000 meters above sea level.

Its proverbial speed, which seems to touch 340 km per hour, is possible thanks to the very tapered body and the ability to flap its wings even in vertical flight. Like other birds of prey, the eyes of the pilgrim are protected by a double membrane, one of which is transparent, in order to swoop without having to close the eyes but at the same time avoiding dangerous collisions with blunt instruments.

The species is not only territorial but also monogamous, so it follows that the young move away before the new annual mating season. The female lays 2-4 eggs and hatching, which begins in March, is done by both parents and lasts about a month. The weaning of the offspring can last up to 3 months. Historically sought for falconry, the chicks were kidnapped from the nest and bred in captivity to be sold. Even today, falconry uses these birds of prey, often crossed with related species.

The peregrine falcon is a species particularly protected by Italian legislation pursuant to art. 2, paragraph 1 of Law 157 of 11 February 1992. 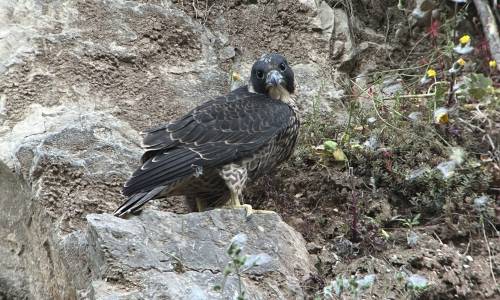