There are 500 couples in Italy, three quarters of them live in the Alps, but the particular morphology of the territory of the north of the Marche, carved on the limestone rock of Monte Catria, Monte Nerone, Monte Petrano and Gola del Furlo, combined with secondary grasslands that overlook them, has allowed the settlement of 4 couples.

The eagle reaches more than 25 years of life, has the goal of forming a couple and taking possession of a very quiet area in which to build a nest and get food. Eagles are super predators at the top of the ecological pyramid, extremely territorial and as a result of their attachment to the area in which they live, they limit their movements and must therefore be based on the availability of space (from 3,000 to 8,000 hectares) and of food they find. . The life of a pair of eagles is marked by ten distinct phases that are repeated year after year: between January and February the construction of the nest or more often the arrangement of the one used previously, the courtship rituals in which male and female show each other their vigor, mating, egg laying, hatching, the birth of the pullets usually in the month of April, the weaning which lasts up to 3 months, the fledging of the young eagles, the cohabitation of the parents with the children who they learn the secrets of survival, the departure of the young for a journey of thousands of kilometers and a few years that will allow them to make a life and guarantee the continuation of the species.

The golden eagle (Aquila chrysaetos) belongs to the accipitridae family; it has a total length of about 90 cm, a wingspan between 180 cm (males) and 230 cm (females), a weight ranging from 3 to 5 kilograms. The flight feathers can reach a length of 60 cm. Eagles are especially active on hot days, when they can take advantage of updrafts. The food spectrum of eagles ranges from hare to micro-mammals, from reptiles to large insects, from medium-sized birds to amphibians. Females lay up to 3 eggs and hatch them for about 40 days: normally two hatch. The chicks are completely covered with a white plumage and often only one of them reaches the end of weaning: if the food resources are not sufficient or if there are significant differences in the size of the chicks, episodes of kainism can occur, in which one of the chicks kills. the other.

To protect golden eagles, environmental legislation has made it possible to create highly protected areas within a radius of 500 meters from the nesting sites, with the prohibition of approaching both on excursions, climbing or flying; for the need to protect their prey as well.

The golden eagle is part of the exclusive list of wildlife protected by Italian legislation; his killing is a criminal offense, pursuant to Article 2, paragraph 1 of Law No. 157 of 11 February 1992. The level of protection, however, fails to eliminate the scourge of poaching against this symbol of nature: in the mid-90s two specimens were shot dead on Monte Catria and in 2005 the female from the Gola del Furlo was poisoned, fortunately not lethally. Other causes of mortality are the high voltage wires, which caused the death of an eagle on Monte Nerone in the early 2000s and the collision with the wind turbines with respect to which there are in fact severe limitations in the territories frequented by eagles. 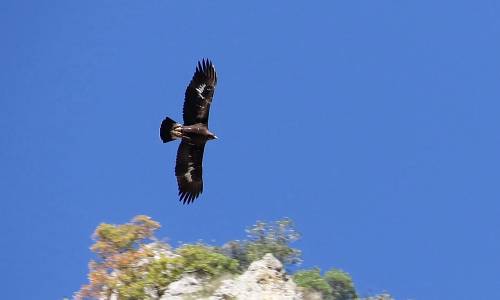 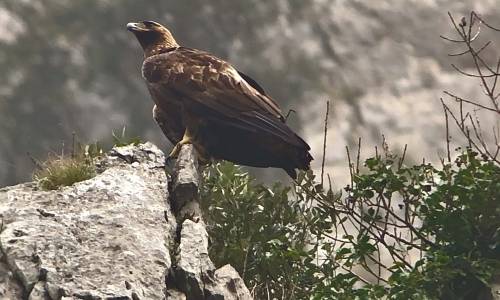 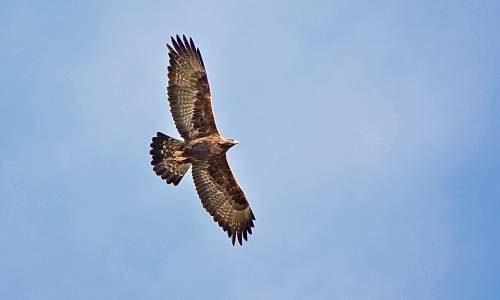